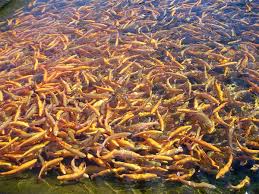 The Danish authorities asked the fishermen with a request to catch 70-80 thousand rainbow trout. The fish happened to be on the outside after a cargo ship on the morning of Tuesday, October 11, crashed into a fish farm in the municipality of Assens (region of southern Denmark) in the South of Jutland.

The ship was heading from the Russian Kaliningrad to the Danish seaport of Kolding. After it crashed into the fence fish farms, without damaging them, tens of thousands of fish were at large and were being disseminated in the region.

Experts fear that large specimens weighing up to three kilograms can disrupt the ecological balance, starting to eat the eggs of other trout species that live in those places.

As complained to a member of the Association of fishermen of Denmark Soren Knabe, now the worst period to release the trout in such numbers. “Sea trout arrives now to the island of Funen for spawning, and their eggs are a favorite food for rainbow trout. “Runaway” rainbow trout will follow the sea trout and will eat her eggs,” he predicted Knabe possible developments.

At the same time one of the fishermen in conversation with Reuters said that the fish will need four or five days in order to adapt to the new conditions and start to eat the eggs.

Soren Knabe expressed hope that the fishermen will help to keep the ecological balance and caught most of the “escaped” fish. At the same time, he recalled that to this end those wishing to participate in the transaction should be fishing.

It is noted that while fish farm counts for the loss of 250 tons of fish. The approximate cost of such quantities of trout, 8 to 9 million DKK (1,19-1,34 million USD).

Rainbow trout (rainbow trout) – fish of the salmon family. In natural waters reaches a length of 40-50 cm and weight of 0.8-1.6 kg. In ponds provided permanent feeding with artificial feed and natural food supply is rapidly increasing body weight up to 6-8 kg. rainbow trout is the object of industrial cultivation. Its natural habitat is freshwater the Pacific coast of North America, acclimatized in many countries of the world.